Hi, everyone! I’m getting a little bit busy as the days goes by because of school so I’m sorry for the lack of posts — not that I’ve been posting regularly in the past.

Anyways, I’m so delighted to have Mary Fan, the author of Stronger Than A Bronze Dragon (out on 6/11). It’s basically a steampunk, set in Qing Dynasty with badass ran away bride heroine and also a badass softie™ thief. 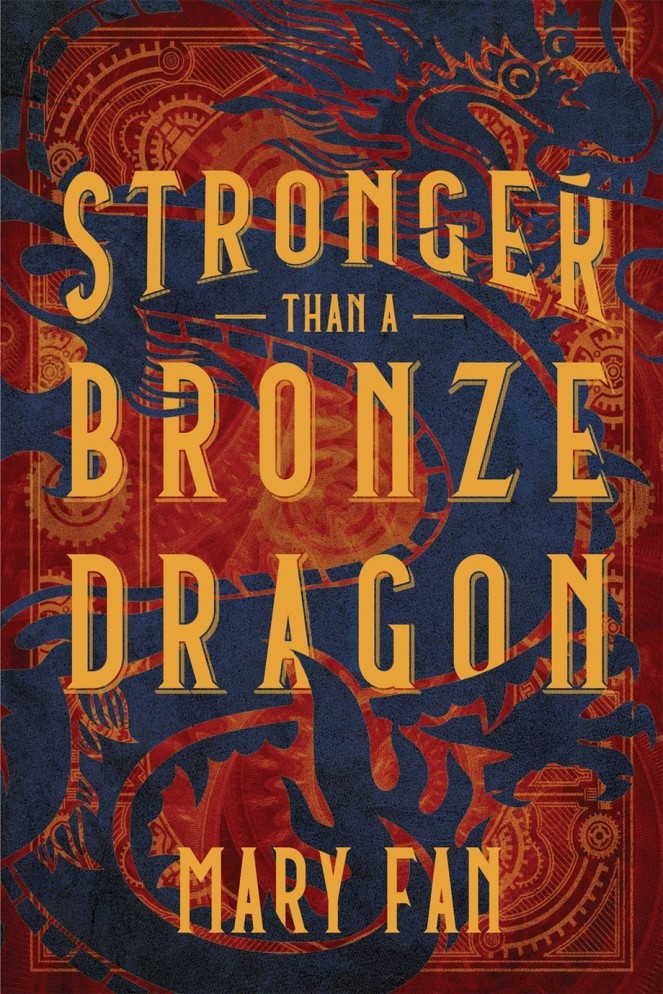 Title: Stronger Than A Bronze Dragon

When a powerful viceroy arrives with a fleet of mechanical dragons and stops an attack on Anlei’s village, the villagers see him as a godsend. They agree to give him their sacred, enchanted River Pearl in exchange for permanent protection—if he’ll marry one of the village girls to solidify the alliance. Anlei is appalled when the viceroy selects her as a bride, but with the fate of her people at stake, she sees no choice but to consent. Anlei’s noble plans are sent into a tailspin, however, when a young thief steals the River Pearl for himself.

Knowing the viceroy won’t protect her village without the jewel, she takes matters into her own hands. But once she catches the thief, she discovers he needs the pearl just as much as she does. The two embark on an epic quest across the land and into the Courts of Hell, taking Anlei on a journey that reveals more is at stake than she could have ever imagined.

With incredibly vivid world building and fast-paced storytelling, Stronger Than a Bronze Dragon is great for readers who are looking for something fresh in epic fantasy.

Stronger Than A Bronze Dragon Inspirations

Most of my writing projects represent a mishmash of inspirations from all over the place. STRONGER THAN A BRONZE DRAGON is like that too. It’s hard to pinpoint exactly which stories and ideas influenced this book, since I wasn’t reading/watching/exploring things with the specific intention of using them (I didn’t really have much of a research phase while before writing the first draft – a lot of that came after, when I was revising and looking to bring things to life more).

Of course, nothing comes from nothing, and no book exists in a vacuum. In retrospect, I drew inspiration from a lot of places for this book – I just may not have been aware of what I was doing at the time. It was more subconscious, the result of a wandering mind picking up bits and pieces from past experiences. The only direct inspiration I can recall is this photo series featuring images of late Qing Dynasty China by 19th century photographer Thomas Child that I stumbled upon in The Atlantic (check link for more photos): 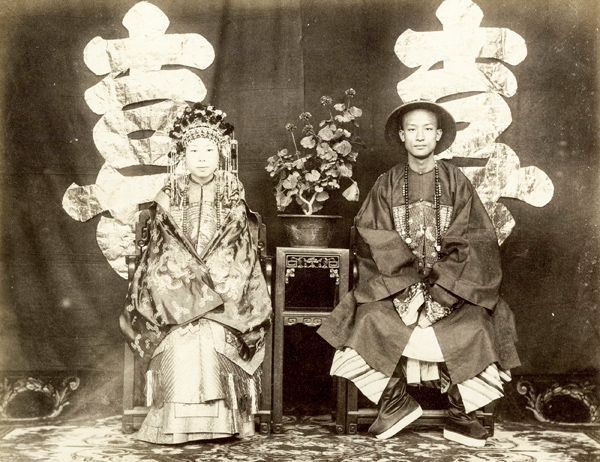 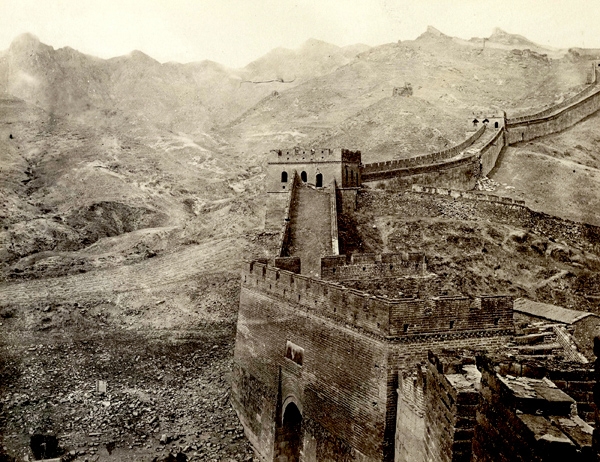 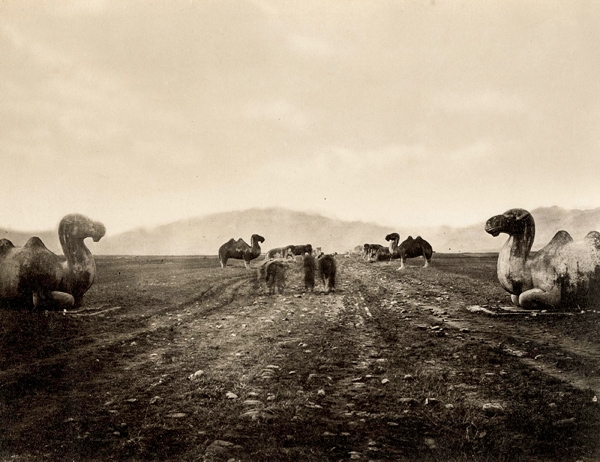 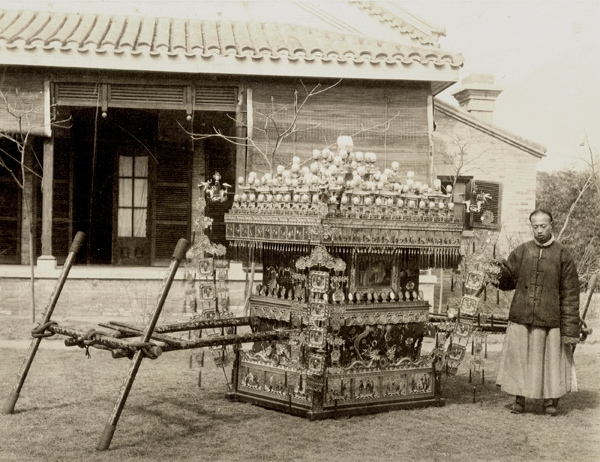 STRONGER THAN A BRONZE DRAGON wasn’t even a brainstormed idea at the time, but those images stuck with me, and when I decided I wanted to write a fantasy, they came to mind at once to form the basis of my setting—particularly for the cities featured in the book.

Another inspiration for the setting was my dad’s hometown in China – a small farming village near Xiamen (it’s so small, it doesn’t even show up on Google Maps as far as I can tell). I’m not naming it both for privacy reasons (a lot of my family is still there) and because I’m not 100% sure I’d Anglicize its name correctly anyway. I’ve visited a few times, and while it’s modernized with the times, a lot of the past remains as well. It wasn’t hard to mentally strip away the electric lights, TVs, and newer tile buildings and imagine what it might have looked like a century and a half ago. And that’s where the ideas for my heroine’s village came from.

As for the steampunk elements of the book – honestly, I just like steampunk. I liked it before I knew what it was – I read a lot of Victorian sci-fi when I was a tween/teen (Jules Verne, H.G. Wells, arguably Sir Arthur Conan Doyle since, let’s face it, he was making a lot of stuff up). And of course, steampunk is the descendent of Victorian sci-fi. Meanwhile, two of my favorite animated movies are Disney’s Atlantis: The Lost Empire and Treasure Planet, both of which are heavily steampunk (brass-plated, implausibly advanced underwater vehicles in the former, pirate ships that sail through the void of space in the latter, both full of clunking gears and spewing steam).

I wasn’t specifically thinking of any of these works when I dreamed up giant mechanical dragons and lanterns that hovered on tiny propellers, but I’m sure they seeped into my mind and emerged onto the page as I was writing. As for why I combined fantasy with steampunk – again, to be frank, I just liked it. For me, looking at photos from Victorian England immediately conjures images of steampunk goggles and such. So maybe it’s not surprising that I mentally mapped such elements onto Thomas Child’s photos of 19th century China.

Another influence, in retrospect, was a Chinese TV show I watched as a teen, whose English title is “My Fair Princess.” Set in Qing Dynasty China (with a heavy coating of TV gloss), the show told the story of a common girl, an urchin really, who gets mistaken for the long-lost daughter of the Emperor while trying to deliver a message for the real lost princess. Hilarity and drama ensue. While STRONGER THAN A BRONZE DRAGON isn’t really like the show plot-wise (or even character-wise, since the main character of “My Fair Princess” is cutesy and fun, rather unlike my angry and sometimes-too-serious heroine), I’m pretty sure I subconsciously borrowed a few tonal beats.

The magic and mythology that ended up in STRONGER THAN A BRONZE DRAGON could have come from any number of poorly recalled legends and stories I heard from my parents and grandparents as a kid. I have no idea when I first heard of lunar spirits or shadow demons or godlike dragons – or how “accurate” my portrayal is. And because this is fantasy, it really doesn’t matter, in my opinion. Besides, Chinese creators in China are always messing around with the mythology (my mom took particular umbrage to how Zhang Yimou portrayed the creatures in The Great Wall, which are apparently based on a real myth but are nothing like them).

I’m sure there’s a lot more that went into STRONGER THAN A BRONZE DRAGON through subconscious influences that may become clearer in hindsight, even if I wasn’t intentionally seeking inspiration from them. Again, nothing comes from nothing, after all.

Prize: One (1) copy of Mary Fan’s STRONGER THAN A BRONZE DRAGON. 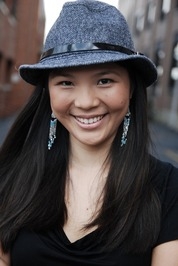 Mary Fan is a hopeless dreamer, whose mind insists on spinning tales of “what if.” As a music major in college, she told those stories through compositions. Now, she tells them through books—a habit she began as soon as she could pick up a pencil.

Mary lives in New Jersey and has a B.A. from Princeton University. When she’s not scheming to create new worlds, she enjoys kickboxing, opera singing, and blogging about everything having to do with books.

Published by Aki @ The Bibliophile District

Hello! I'm Aki, an Asian teen book blogger who, obviously, loves to read and procrastinate. View all posts by Aki @ The Bibliophile District

This site uses Akismet to reduce spam. Learn how your comment data is processed.

“I'm willing to walk in darkness if it keeps humans in the light.” — August Flynn, Our Dark Duet - - - Please do not mind my another attempt of bookstagram. I'd be posting sporadically which is already unsurprising but you get the point. Treat me warmly! *chuckles* 💕 Also, it is officially my birth month!! 🎂 Where are my birth month twins here? ♡ - - - Here's my current read! I've finished the first book last week and I just need to read the sequel immediately. Victoria Schwab gonna own my life in no time. Tell me your thoughts for the series below. (No spoilers pls) 👀 I'm planning on posting a series/dual review on my blog for this series so you might want to check it out once it goes live. I'd appreciate it alot. ♡ - - - #bookstagram #books #bookstagramph #ourdarkduet #ya #yabooks #fantasy #book #novels #reads #currentlyreading #currentread #bookworm #bibliophile #bookish #monstersofverity #victoriaschwab #bookstagrammer #bookseries #bookslover #bookstagramfeature
"The kind that keeps stars from falling out of the night sky." Yep. Another The Gilded Wolves quote... • Anyways, I've been really busy the past days that I had no time to read any books. I read little to no chapters at all. It's because we've been practicing our performances for the upcoming flag raising on Monday. 😴 I'm stuck at nearly 50% of an ARC I'm currently reading since 12th! It's long overdue. 😭 • @chapterguilty tagged me to do the #5thingsilovedoing tag. Thank you! 💛✨ - Reading 📚 - Calligraphy 📝 - Blogging 💻 - Graphic Designing 📏 - Watching films 🎬 • QotD: How do you find time to read despite of busy schedules? • • • • • • #OurYearofMaybe #books #bookish #bookstagram #bookstagramph #thegildedwolves #bookshelves #bookshelf #shelfie #igbooks #reading #currentread #currentlyreading #bookworm #booklover #bibliophile #ya #youngadult #novels
“He didn't understand that sometimes the only way to take down what had destroyed you was to disguise yourself as part of it.” - FINALLYYYY! Welcome to my tour stop of the PH blog tour for THE GILDED WOLVES hosted by @theroyalpolarbearreads & @shainecch ✨💓 My book review is now up on my blog and as usual the link is in bio. 🔗 - This book is a major mindblown with all the puzzles to solve. You will surely love ALL the characters because they're so LOVEABLE and DESERVE EVERYTHING IN THIS WORLD. Tell me where I can sign up to join their family. /cries/ - Plus, don't you all love diverse books? Because I do! 💯 This book just screams diversity, I swear. We got a Filipino, Jewish, Indian and other reps which is a big thumbs up! 👍 My Filipino heart is sooooo happy. 😭 I can't help but be thankful. Representation is really important. 💗 - - - - - - - - #bookhoarder #bookish #bookreview #bookstagram #thegildedwolves #gildedwolves #roshanichokshi #books #bookblogger #blog #blogger #diverse #diversity #blogtour #bookgram #booknerd #bibliophile #booklover #bookaholic #bookworm #literature #novel #fantasy #ya #yabooks #youngadult #historical
“There are monsters in the sea.” - Finally got my own physical copy of Eliza and her Monsters by @chessiezappia! This book is of my most fave books ever and I highly recommend reading it. Everyone, do yourself a favor. Read this. It's totally a devastatingly beautiful book. - By the way, THUG and COBAB have been on my TBR for so long. I planned to read it in 2018 but sadly I wasn't given a chance so we'll do it this year. Maybe on February because this month is full of ARCs for me! Definitely need to control that ARC tbr. /shaking my head/ 😌 - - QotD: What book you planned to read in 2018 but didn't got to? Comment below! - - - - - - - #bookstagram #bookish #bookshelf #bookphotography #booklove #bookig #THUG #COBAB #diverse #representation #representationmatters #diversity #literature #diversebooks #booknerd #bookstagram #igbooks #bookish #bookseries #bookhoarder #bookclub #bookoftheday #booklife #bookworm #booklover #booknerdigans #bookdragon #booktography
”You have to pretend you get an endgame. You have to carry on like you will: otherwise, you can't carry on at all.” - - So, I finished reading Carry On by @rainbowrowell last week of 2018 and OMG I'm inlove with SnowBaz! Have you read it? Comment your thoughts below! (Read my full review on my blog. Link in bio.) ✨ - Btw, I'm thinking of posting bookish photos again here and so yeah here I am. Welcome back, self. 💗 - - - - - #bookstagram #books #bookshelf #book #carryon #rainbowrowell #rowellbooks #fangirl #simonsnow #baz #snowbaz #blog #review #blogger #read #reading #igbooks #nerd #bibliophile #bookish #booknerd #currentreads #ya #yabooks #yareads #youngadult #youngadultbooks #fiction #fictionbooks #fictionalcharacters